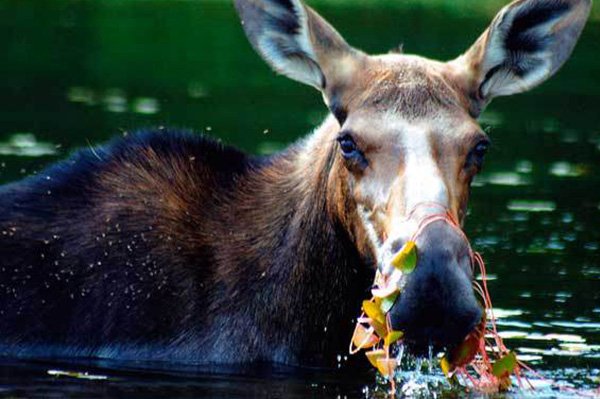 If you’ve ever driven any distance through the Canadian bush (as Shania Twain calls it), especially endless miles of tree-lined, two-lane highway, then you will know about the moose.

There are foreboding signs along the way featuring outlines of these hulking creatures nonchalantly strolling across your path. The message is not one of protecting the environment, it is one of avoiding mortal danger. An uneasy feeling starts to set in right about dusk, when the light of the sky darkens enough to match the light thrown by your high-beams.

If you know about the threat of the moose you will tend to slow down just a little, and your eyes will skirt furtively for motion and shadows along the treelines. Because you do not want to hit a moose. If you do, it will almost certainly be THE event of your day.

Except for the driest regions of southern Alberta and Saskatchewan, and big parts of the far north, moose are EVERYWHERE in Canada. Unconfirmed reports from my travelling buddy Bob Fisher state that there are now more moose in the province of Newfoundland than there are inhabitants of the capital city of St. John’s. And moose are not even indigenous to the island. 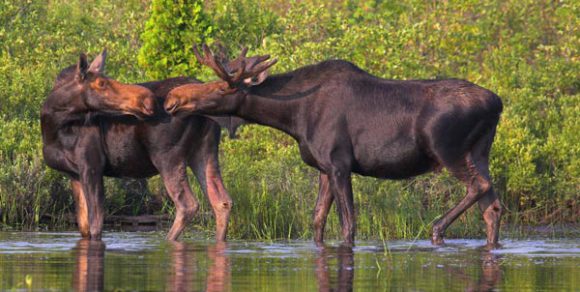 My partner Judy recalls the first time she ever saw a moose: “I was barreling down a highway through La Verendrye Provincial Park in my old Vega, on my way back to Montreal from Val d’Or. I had just passed a big lumber truck and when I came over the crest of a hill there he was standing beside the highway. I stopped, afraid he’d cross in front of me and all the while fearful of that lumber truck bearing down behind me. The moose and I eyeballed each other for what seemed like an eternity and then he turned his back on me and clambered down into a mineral pool beside the road.”

Ontario’s Algonquin Provincial Park is a good place to spy a moose. There are about 3,400 in the park. Moose are elusive creatures but in spring, you can often spot them alongside Highway 60 which runs through the southern portion of Algonquin Park. Beside the highway are small mineral pools  filled with runoff and salt from winter highway maintenance. Moose can be salt-depleted by spring and often feed in these pools which are salt-rich. The month of May is susceptible to “moose jams”, when you can see 30-40 cars of travelers stopped on the side of Highway 60 to watch a moose feed in a roadside pool. 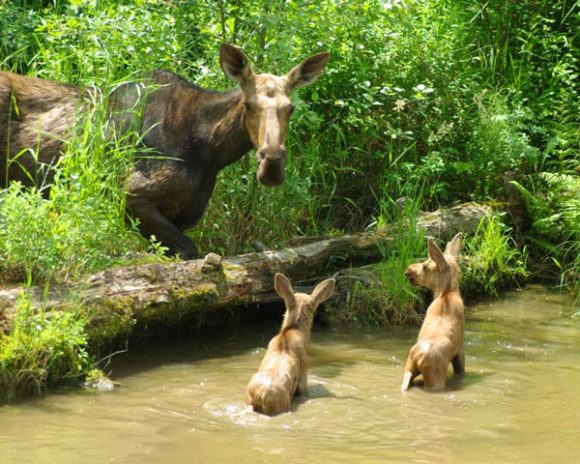 All of the moose photos in this post are courtesy of Ontario Parks. The moose twins pic was snapped last spring by a staffer who works with the provincial parks system in Ontario, Canada’s second largest province. 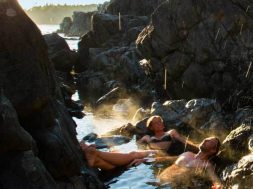 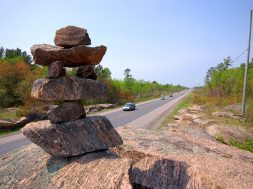